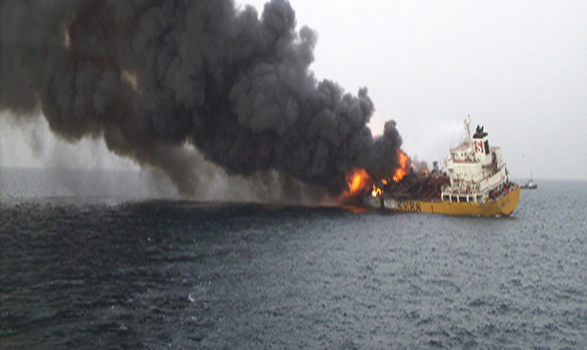 Captain A. M. Al-Janahi, Director of the Marine Emergency Mutual Aid Centre (MEMAC) has stated the following with regard to the recently occurred Stolt Valor incident as an update:

A number of explosions and fire had taken place since the first fire explosion on board of the tanker Stolt Valor on Thursday, 15th March 2012, but the Salvage Team managed to contain the situation successfully. They also managed to contain most of the pollutants which would have harmful effects on the marine environment. Now they are still carrying out the process of unloading the remaining quantity of the pollutants, and it is expected that the process of unloading all the pollutants will be completed by Sunday, 1st of April 2012.

The ship now is under full control and it is in a stable position. She does not form any threat to the Region’s coastal areas as she is located off shore, far away from the coasts. Nevertheless, she might break down at any time due to speedy winds and high waves if they occur.

MEMAC would like to assure that the cargo material will evaporate if it is posed to the air, while the remaining quantity will dissolve in the sea water. However, some rumors regarding the cargo material have recently been spread, but they are untrue and false. Therefore, MEMAC would like to clarify the truth and give a short scientific idea about the cargo material, which MEMAC has obtained from the International Tanker Owners Pollution Federation Ltd. (ITOPF) and the Scientific Group of the International Maritime Organization (IMO) as follows:

As we know, MTBE is a flammable substance and the vapours mixing with air would lead to a flammable mixture in the vicinity of the slick. The relative vapour density and the relative vapour air/mixture of MTBE being above 1, it means that this mixture would tend to remain at the sea level. The dissipation potential would be dependent on the wind at the time of the spillage, the stronger the wind, the faster the mixture would dissipate to reach the lower flammable limit (level below which no more ignition is possible).

With respect to the effect on the marine environment, according to the IMO Group of Experts on Scientific Aspects of Marine Environmental Protection (GESAMP) hazard profiles, MTBE does not bio-accumulate and has a low aquatic acute toxicity (rated 1 in 0-6 scale, 0 being the lowest) and very low chronic toxicity (rated 0, 1 in 0-4 scale, 0 being the lowest). It has however the potential for tainting seafood products. Tainting is the process whereby seafood acquires an off-flavour following exposure of the food organism to a chemical substances. Although it has the potential to render the seafood not amenable for consumption, it is however a transient phenomenon.

Like MTBE, IBAL is a floater / evaporator (maybe dissolver but different sources give different values – soluble according to International Programme on Chemical Safety - http://www.inchem.org/; not soluble according to NOAA Cameo chemicals - http://cameochemicals.noaa.gov/ ) which means that any spillage in water would initially float and rapidly evaporate (and/or possibly dissolve).

IBAL has the same flammable properties as MTBE and the same remarks apply.

With respect to the effect on the marine environment, IBAL has no GESAMP profile which could suggest it is not soluble as soluble substances are usually targeted in priority by the IMO Group of Experts.